Justin has shown considerable talent behind the wheel. In his first season driving a limited late model in 2013 for Lee Faulk Racing, he has 2 wins out of 6 races, never finished lower than 6th place and had no damage to the limited late model race car during the season. After winning the Fall Classic 100 lap race at the end of the season, during an interview for The Tribune Review, Lee Faulk, owner of Lee Faulk Racing, commented: "He's a natural. Very few drivers have caught on as immediately as he has." View this video of Lee Faulk's testimonial about Justin.

Since graduating in December 2017 from UNC Charlotte with a Bachelor of Science Degree in Mechanical Engineering with an emphasis in Motorsports, Justin is currently looking for an engineering position in the motorsports industry. The following information on this page was used when Justin was racing while attending College. His racing experience along with his Degree in Mechanical Engineering will give him a solid start to his career with a racing team.

Race Your Company to the Top of the Leader Board

Justin Bolton will go the extra lap to promote your business to the most loyal fans in sports. He will drive your company to the top of the leader board with exposure to a larger audience, increased brand loyalty and recall, revved up sales to a loyal customer base, a personal connection with fans, and an expanded social media and online presence. Take a couple minutes to view this short video that shows the benefits of a partnership with Justin Bolton. 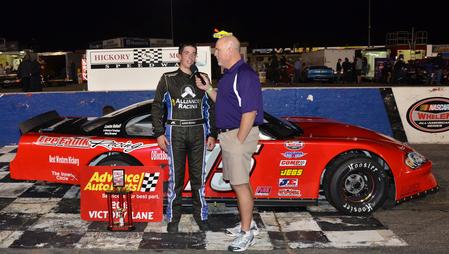 Justin attends UNC in Charlotte, NC majoring in mechanical engineering with an emphasis in motorsports. Racing is Justin's passion and his career choice. If he is not in class or at the track racing, he is iRacing preparing for his next race at the track. His determination to make racing part of his everyday routine can include promoting your business.

Racing relies on businesses to use not just the cars but also the drivers for advertising. Justin is willing to be available to attend business promotional events signing hero cards, attend charitable events, be a voice in a radio spot, be in a promotional Youtube video and/or television commercial. Working together, Justin and your company can build that "buzz" or excitement around your business using racing to keep your customers engaged week after week. Racing can also be used as a team builder for your employees to keep them motivated. Justin uses social media for contests where your employees and/or customers can enter to win promotional items.

The internet has expanded the visibility of these young up and coming drivers world wide. These drivers racing at their local short tracks are now able to have a large following of fans as they race their way through the ranks of NASCAR. Justin has a well established web site with photos and videos of his races, videos of his interviews and easy access to all the articles written about his racing accomplishments. Facebook and Twitter allow the fans direct contact with Justin and the companies and products he endorses.

Yet another advantage your business receives when partnering with Justin is advertising on iRacing. iRacing is the multiplayer on-line racing series with over 45,000 members. NASCAR has partnered with iRacing to officially recognize the iRacing series. Drivers compete to run a 39 week 18 race series to be crowned as an official NASCAR champion. When you partner with Justin, his car on iRacing will have your business name just as his actual race car he drives on the track. Justin will compete in the Pro series on iRacing for a chance to be eligible for the championship. The Pro series races are broadcast online for anyone, not just members, to view.

Racing, as you can see, is Justin's life. He has been focused on this goal since the young age of 14 and has not let anything get in his way. The lack of funding for a full season of racing is the only thing right now that is keeping him from the track full time. Justin has full support from his family, who is doing everything they can to give him the opportunity to get back in a car. On his own, Justin keeps his driving skills sharp with iRacing and is committed to his studies at UNC, as well. Justin would be just as committed to endorsing your business.

Your company can begin to maximize the impact of your advertising by targeting a select group on a continual basis. Justin can provide your company with the following: